Several Club members are planning to travel over to the Tour Down Under in South Australia in January 2019 and welcome anybody who would like to join them. This is not an official Club event but a way for members and non members to get together. It is a chance to see a World Tour Race up close and do some riding around Adelaide and the Adelaide Hills. There is a great atmosphere with thousands of cyclists riding on the routes of the race stages and hanging out in the towns along the routes. 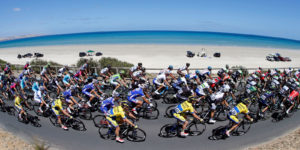 Ross O and Ken and Jennie Stewart are booked to camp at the Mt Barker Caravan Park, where we have stayed previously.  It’s situated in the Adelaide Hills, on the main highway, 34 km from Adelaide. There is good access to the stage routes from there. However there are less camping spots available than  previous years due to site changes – it would be advisable to book soon. We are booked to camp there from Monday 15th January to Monday 21st January. If you would prefer to stay in Adelaide or elsewhere in the Adelaide Hills still fill out the form below as it would be great to all met up.

There are many events associated with the TDU over the period from 13th January to 21st January. In Adelaide there is a Tour Village and an Events Calendar. The  Women’s TDU stage race is from 10th to 13th January. The public ride, The Challenge Tour public ride is on Saturday 19th Jan and travels the route of Stage 5 of the TDU. We think it is quite expensive and is not on closed roads where we will be riding anyway so don’t intend to enter this ride. 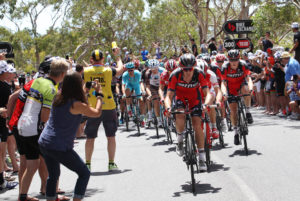 The TDU Men’s race stages can be found here: TDU Stages.  The highlight, both from a riding and a spectator perspective,  is the “Queen Stage” Stage 6, on Sunday 20th Jan with it’s famous finish on Willunga Hill. The Wilunga Hill climb is open for all cyclists before the main race finishes (as is the entire course) and is no more strenuous to ride up than the north side of Mt Macedon – and shorter! It’s a fun thing to do.

Please fill out the form below if you are planning to come to the Tour Down Under. There may be an opportunity to travel together.